From several years on BENESSERE.COM a service of planning of training oriented to start, recovery or improvement of road running has been published.
In order to access this service, we have to enter some personal data and, to receive the training program best suited to our abilities, Cooper Test result is required.
Actually the accesses to this service, were more than 20.000 , that is, a large population of which a good part has used this service several times.
From that very numerous population, we" filtered" a sample of 800 subjects who have benefited 2, 3 and 4 times of this service and so, have introduced several times Cooper Test result.
The "filtered" sample were divided into groups by sex and number of tests introduced.
For each  group selected, average values (and relative standard deviation) of age and of each Cooper Test result C_1, C_2, ecc., the relative number of cases in each group, and the increments between the individual tests were calculated. 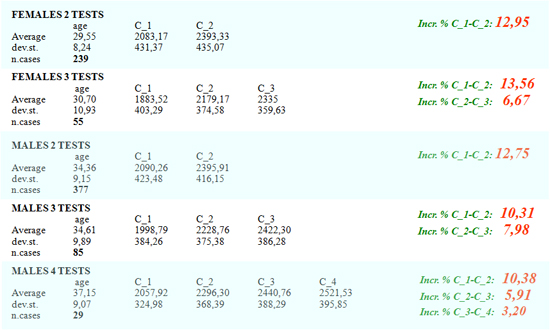 From the analysis of the observed increases, we can say that anyone who has run a program provided by the BENESSERE.COM service, had an improvement in rates above 12% (for both sexes) after completing the program, increase that, obviously, tends , in percentage, to decrease after the second and third program, but in absolute indicates, unequivocally, a marked improvement of the organic condition of the user, improvement that turns into a mental and physical wellbeing.